None of us enjoy paying more taxes than required. What if I told you the investment accounts you own are probably not set up correctly to pay fewer taxes over your lifetime?

Here are three areas to consider when setting up your investment accounts.

Which types of players do you want as your offensive lineman on a football team? Most would probably want the largest, strongest players there to protect the other players. Makes sense right? Well, the same idea can be applied to your different investment accounts.

I’ll outline the three main account types I see (there are others out there, but they largely fall within these parameters): 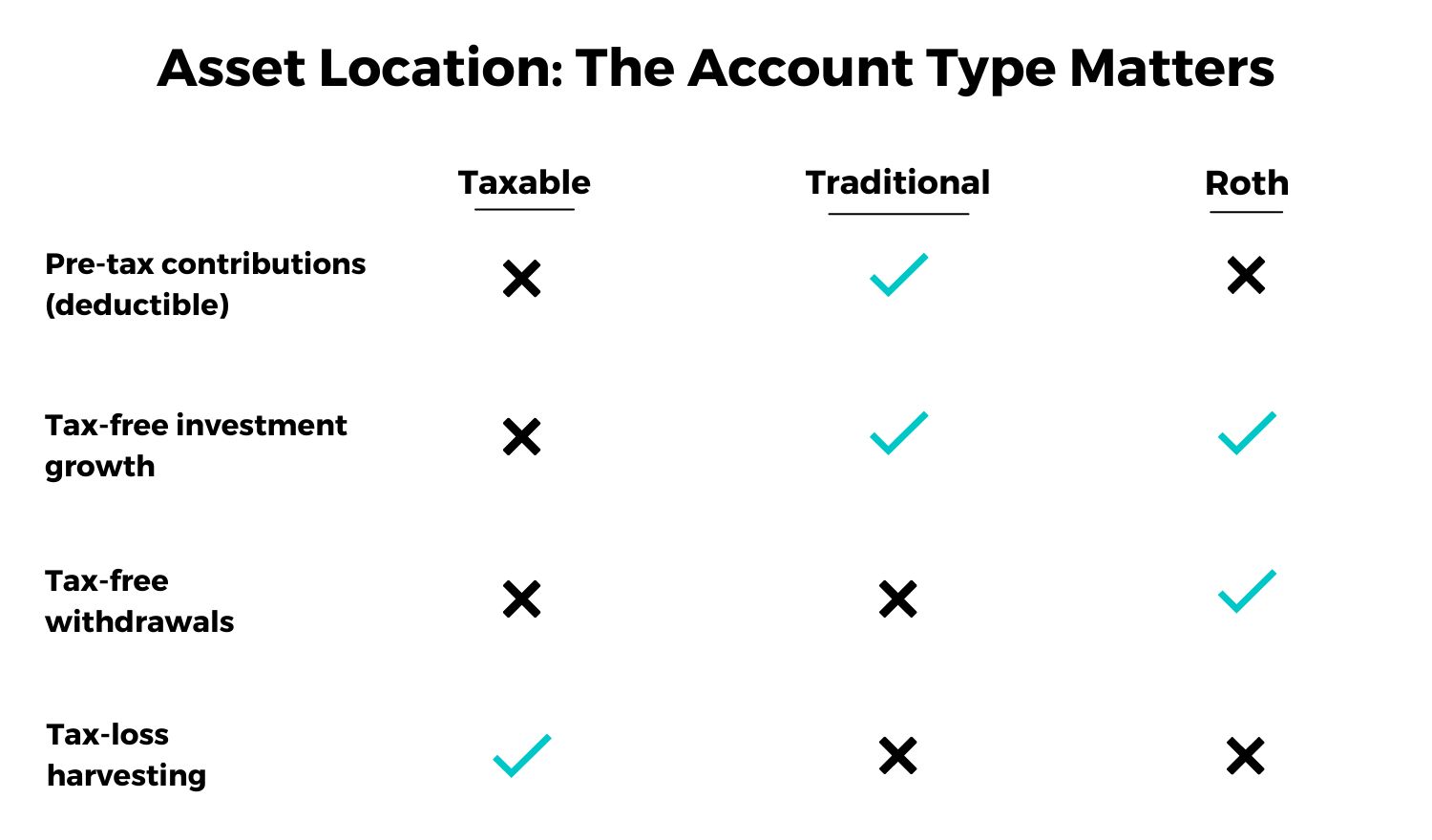 The money you contribute goes in without paying income tax. The investments grow without being taxed as well. Upon withdrawal, the IRS wants their cut-off of your account, so you pay income taxes on any amount you withdraw after age 59 1⁄2. Best for investors who believe taxes, in general, will be lower in the future than they are today (i.e. you make $1 million per year and will drop off to only requiring $200k per year in retirement).

Money contributed to a Roth IRA is included in your normal income on your tax return, so income taxes are already paid upfront. Investments also grow tax-free and as long as you’ve had a Roth for longer than five years and are over age 59 1⁄2, the full amount you withdraw is completely tax-free. Roth IRAs have income limits to who can directly put money in, which can complicate how the funds are contributed. These are best for investors who believe they will be in a similar, or higher tax environment in the future. Placing investments that have higher growth prospects than the others will result in a larger balance with tax-free withdrawals!

Investment types for Roth accounts: Small companies, real estate (REITs), anything you expect to have a high growth rate over the long term

Money contributed generates no tax benefit and has already been taxed (you received the funds from your paycheck). When the funds are invested, you will pay taxes on any dividends generated, or gains/losses from sales. The dividends/gains/losses are included on your tax return for the year. These can be nice supplements to other retirement accounts since there are no income limitations. Since income generated by investments is taxed as it grows, avoid placing high dividend / high-interest investments in these accounts. If investments are held for longer than one year, they are taxed at long-term capital gains rates, which are more favorable than your regular income rate.

This can be advantageous when the investments pay little to no dividend, so little to no taxes are generated as the investment grows. When sold, the after-tax return can be higher than a 401k or Traditional IRA since only the gain is taxed, and at a lower rate.

As you may notice, there are some overlapping ideal investment types for the different account types. You can plug in or replace certain types with which accounts you have. This is simply a starting point to consider, not hardline recommendations. Each investor has their own preferences!

More isn’t always better. In this case, I’m referring to how often your accounts are traded.

Did you know if you own mutual funds, the money inside the fund is traded even though you don’t see it? The problem is how mutual funds are constructed. When investors put money in and take money out, trades need to be placed to keep everything in line. Trades have costs since nobody works for free! If the fund does a lot of trading anyway as part of its strategy, these hidden trading costs go way up.

Vanguard’s Jack Bogle estimated approximately every 100% of turnover (how often the fund trades, which in this case 100% would be the fund bought and sold every dollar it has invested over the past year, roughly), increases your cost by 1% of your total balance. For example, if your mutual fund has an expense ratio (what the fund’s advertised cost is taken off your investments) of 1%, your cost could double after all the trading! The problem is none of the trading costs are disclosed and you are left paying the bill.

This doesn’t mean all mutual funds are bad. If you are going to use mutual funds, just do a little research beforehand. I like funds with 30% or less in turnover. If you choose an index fund, the turnover will be in the realm of 5% typically. Lower is typically better!

Where taxes come into play is the other consequence of all this internal trading. When a fund sells an investment it must pass any gain on to you, the shareholder. If the mutual funds are held in a taxable account you will have to pay taxes on these gains and dividends which are passed on to you, even if you didn’t sell any shares! This removes your choice on when to pay tax.

Say you recently sold a business and will land in a very high tax bracket this year, but know you will be in a low tax bracket next year since you are taking a good portion of the year off. If given the choice, you may want to avoid selling any investments at a gain in your high-income year, because you will pay a lower tax rate the following year(or no taxes, if the income level is low enough!).

Our last tidbit piggybacks off the previous topic of Trading Activity. In this case, we are going to refer to your own! The practice of “harvesting” losses in your taxable accounts is routinely selling your investments which may be down during the year, and repurchasing them back after 31 days (tax rules). The idea is you get to show a loss on your investment for the year and buy it back within a relatively short amount of time to stay invested for future growth.

In harvesting your losses, it offsets any dividend income you may receive, mutual fund distributions we discussed earlier, and even your own earned income! The IRS allows up to $3000 of passive losses (i.e. from your investment accounts) to offset earned income. Once the $3000 of losses is met against earned income, any additional losses you have get carried forward indefinitely to use in the future!

This means even if you don’t sell any investments the next year, you get to offset the dividends/gains/$3000 of income for the following year and any after that until the losses are all used up. Many investors utilized this strategy during the 2008 Financial Crisis and carried their losses forward for several years while remaining invested to ride the recovery wave.